The Russian Language for Foreigners

SPbU offers various Russian language academic programs to foreign citizens with any level of Russian proficiency and the opportunity of admission all around the year.

Winter School of Russian
as a Foreign Language

The academic and cultural Winter School Program allows trainees to broaden their knowledge of the Russian language, improve their speaking skills, as well as to immerse themselves into the atmosphere of the Russian winter.

Summer School of Russian
as a Foreign Language

The academic and cultural Summer School program allows trainees to broaden the knowledge of the Russian language, improve their speaking skills, as well as to immerse themselves into the inimitable atmosphere of St. Petersburg.

SpbU, drawing on the years of the experience in studying, teaching, preservation, and popularity of the Russian language, proposes philologists and particularly specialists in Russian philology to study a range of additional educational programs on Advanced Professional Training. 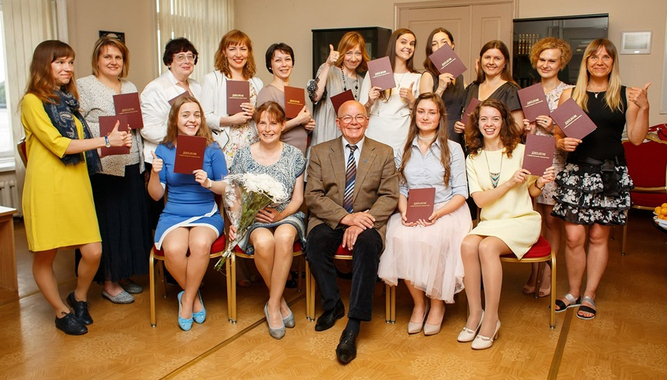 Post-Diploma Training Program is intended to form the competencies in trainees, necessary to perform professional activities in the field of teaching Russian to foreign students. The trainees of this program acquire a new demanded profession with the confirmation in the form of the Diploma of Post-Diploma Training with professional qualifications in teaching Russian as a Foreign Language.

About us in numbers

Countries of the World

Learn more about us

St. Petersburg State University is the European and the world’s largest research and education center. The University has the richest history and justly bears the name of the first Russian university.

Among the University graduates there are six Chairmen of the Government and two Presidents of the Russian Federation. Also nine Nobel Prize laureates studied and worked at the University.

The main buildings of SPbU are situated on Vasilyevsky Island. Sometimes Vasilyevsky Island is called "St. Petersburg in a square", because this is the place where you can find everything that makes the city so unusual. The island impresses with its solemn buildings, embankments, and bridges.

The Center of Additional Educational Programs is located in the building on Leitenanta Shmidta Embankment. This is one of the most beautiful places of the Northern Capital. The embankment is the cultural heritage site, the historical and cultural landmark of Russia.

St Petersburg is one of Russia’s biggest centres of education, an architectural synthesis of Rome, Venice, and Amsterdam proudly holding the title of the cultural capital of Russia, an open-air museum, a city of romantics and white nights. This is where the vibrancy of an industrial metropolis and versatile cultural life converge in the most stunning of ways.

St Petersburg is a chance to discover centuries-old university traditions, broaden your knowledge of Russia and its people, meet new friends from all over the world, and explore the wealth of Russian heritage — the language of Pushkin and Lermontov, Tolstoy and Dostoevsky, Chekhov and Gogol.

Since the establishment in 1724, the University has been collecting, preserving, and creating cultural, scientific, and historical values. A part of the heritage of SPbU is accessible for visiting or online familiarization.

At St. Petersburg State University you can pass the Russian language test and get an official certificate. SPbU is authorized by the Ministry of Education to organize such activities. The certificate will help you to not only test your knowledge and gain confidence, but also get extra points when entering SPbU.